Oxford House is one of the only registered centres in Barcelona where you can take Trinity’s ISE English exams. All our teachers are qualified to prepare you for the exam which is taken at our language school in the heart of Barcelona. We are very proud to have one of the highest pass rates in Barcelona.

If you are not a student at Oxford House and want to sit for the Trinity ISE exam at our centre, you will need to take a specific preparation course that will give you the tools you need to pass the exam successfully.

Timetable: You choose the best time to take this course. (Subject to availability).

Dates: You choose the dates, the course should take place before the exam.

Why certify your level?

Nowadays, to succeed in your studies and in the workplace, it is essential to certify and show your language ability. More and more people invest in Trinity certificates to prove their English level.  Many companies, for example, require their employees to hold these certificates and value them highly.

Trinity’s Integrated Skills in English exams (ISE) assess the four language skills – speaking, writing, listening and reading. These tests are available in five levels ranging from A2 to C2 of the Common European Framework (CEFR).

Preparing for a test has the added benefit of helping to motivate you, giving your English course a final goal.

What is the ISE exam?

The exams has two parts:

This is a face to face interview with the Trinity examiner. The interview includes a presentation and discussion on a topic chosen by the candidate and a listening comprehension task.

According to the parameters of the Bologna Agreement, to receive a degree, university students in Catalonia must demonstrate a B2 level of the Common European Framework of Reference.

Catalan universities accept ISE II Trinity certificate or higher as proof of the CEFR B2 level.

In addition, the testing association ALTE, an entity that oversees the academic rigor of language tests worldwide, has awarded Trinity College London the highest possible level granted, the Q Mark, to the ISE and GESE exams.

This is a British educational institution that has always stood for innovation and quality.  Its English exams are matched to the Common European Framework and are therefore measurable on an international scale.  Additionally, all their exams are fully accredited by the educational authorities in the United Kingdom (OfQual), ensuring the quality of its services.

Trinity is a leader in Spain in bilingual projects, working directly with Autonomous Communities who externally evaluate their students.  It is also one of the leaders in linguistic certification of bilingual teachers.

All Spanish companies receive an annual subsidy for employee training. Why not ask if you can use you company’s training credit to study a language at Oxford House? 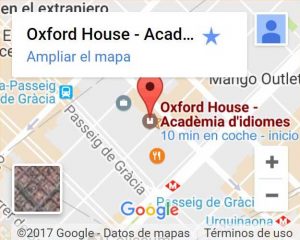